The term traditional Taekwondo typically refers to martial arts practised in Korea during the 1940s and 1950s by the nine original kwans, or martial arts schools, after the conclusion of the Japanese occupation of Korea at the end of World War II. The term Taekwondo had not yet been coined, and in reality, each of the nine original kwans practised its own style of martial art. The term traditional Taekwondo serves mostly as an umbrella term for these various styles, as they themselves used various other names such as Tang Soo Do (Chinese Hand Way), Kong Soo Do (Empty Hand Way) and Tae Soo Do (Foot Hand Way). In 1959, the name Taekwondo was agreed upon by the nine original kwans as a common term for their martial arts. As part of the unification process, The Korea Taekwondo Association (KTA) was formed through a collaborative effort by representatives from all the kwans,

Training in Traditional Taekwon-do is designed to develop students strength, flexibility, stamina etc. The training is a mixed of a variety of exercises and technique combinations where body (hand-foot) but also mind (quick and memorable thinking) are working together in harmony. Each student threw training is improving his body and mind in many aspects and always according to his nature 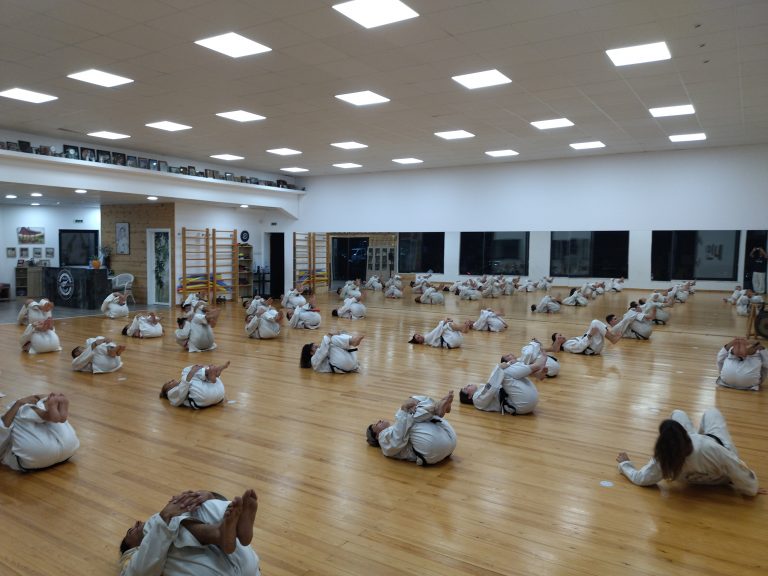 Definetely ‘ woods dont hit back – Bruce Lee’ but the purpose of a break test is other than this common thought. Is to show and measure the power of body and same time of willingness of a student develop threw the years of training. Also, a show of good technique, focus and a beautiful and strong combination of TAE (foot), KWON (hand) and DO (spirit) that lead at the result of a successful break. A breaktest is students achievement and a great show of their skills development 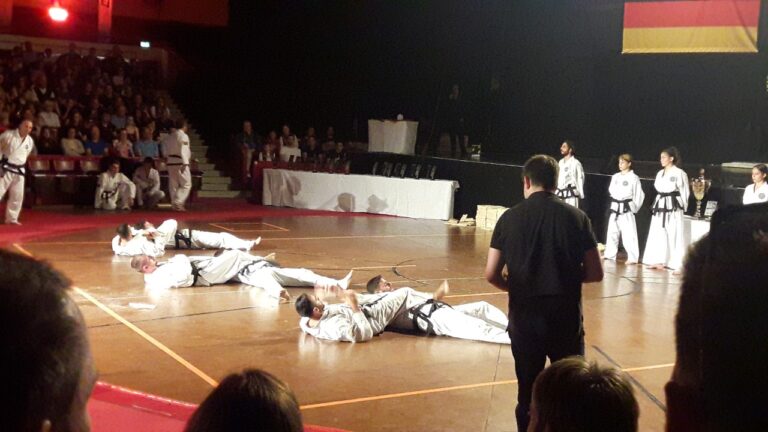 Students in free fight (no contact) or light contact sparring, without the use of any protection equipment demonstrate their skills of how to be effective, fast, powerful and same time with perfect control during their fight/sparring. Exactly as this should reflect on  students social life. Traditional Taekwon-do teaches students to be not a champion in school but a champion in life. 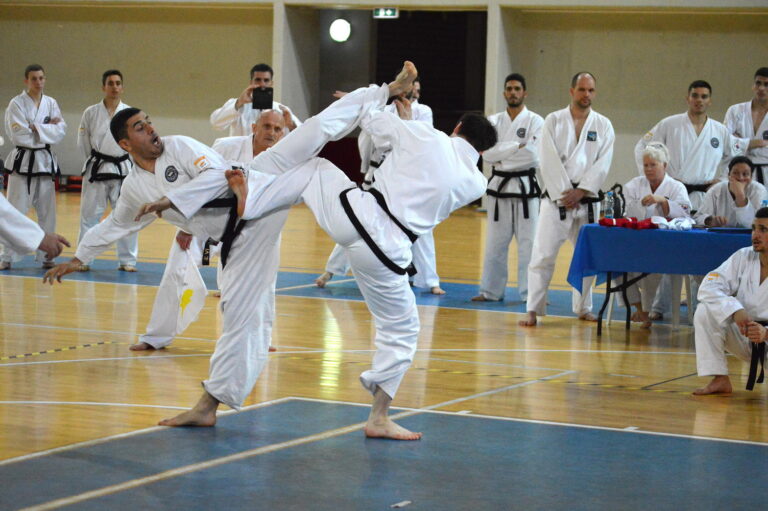 One step sparring is the preliminary stage to free fight. Students learn how to move and execute combinations that are taught in training while an attacker is coming forward. In later teaching is also included a two and three step sparring. 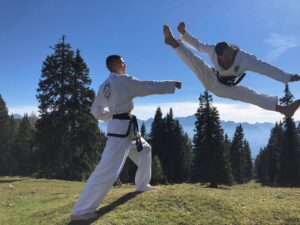 With the end of the Japanese occupation of Korea on August 15, 1946, Taekwondo began to once again flourish and spread to the general Korean public. However, all of the kwans were again forced to close their doors in 1950 due to the onset of the Korean war. Since this time, the original name of the martial art has changed from Dang Soo Do to Kong Soo Do or Soo Bak, Kwun Bup to Tae Soo Do and finally to today’s Taekwondo. Below is a brief overview of the history of the “original founding kwans” who formed modern day Taekwondo:

October 1953: re-established in Gyun Ji Dong (Si Chun Gyo Dang), Jong Ro Gu, Seoul, Korea. When this group was re-established in 1953, they did not have an instructor. Two students of Mr. Lee’s, Jong Myong Hyun and Wun Shik Min, requested Master Byung Jick Ro to come as an instructor. Master Ro helped them re-establish and teach their students until December 1954. Before leaving, he appointed Duk Sung Sohn as head and Mr. Hyun and Mr. Min as instructors.[/pane]

Mr. Sang Sup Jun disappeared during the Korean War in 1950

YMCA building was destroyed during the war and Kwon Bup Bu ceased to exist.

Departed from the ‘original founding’ members of Korea Tae Soo Do Association.
Dang Soo Do originated with the above kwans. Groups established after this time period are branches of the above groups

The name has since been changed to Ji Do Kwan

The name has since changed to Chang Moo Kwan[/pane]

In addition to these kwans, many other groups were started such as: Han Moo Kwan, Jung Do Kwan and Sang Moo Kwan.